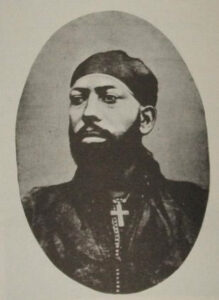 Menelik II was Emperor of Ethiopia from 1889 until he died in 1913. He was a one-of-a-kind ruler who had been through a lot before he came to power. Menelik II endured civil wars, was kidnapped and was even imprisoned. A group of his friends pulled off an amazing rescue to break him out of jail. It would have made Hollywood proud.

When he finally took the throne, he did everything he could to modernize Ethiopia. His dreams suffered a setback, though, when Italy invaded his country in 1896. Menelik II then led his troops to three stunning victories over the Italians. This made him one of the great leaders of his day, and his country remained independent until 1935.

Under King Menelik II’s leadership, Ethiopia acquired its first railroad, a modern bank, and a postal system. He also had his nation wired for telephones, built many paved roads, and installed plumbing—even where it couldn’t be used. Although he was unsuccessful in his efforts to end the slave trade, he was powerful enough to unite formerly feuding factions and double the size of Ethiopia.

When King Menelik II heard about a new device called the Electric Chair, he was determined to get one. He didn’t want it for executions. He wanted it because he heard that it lowered crime. When it arrived, he decided that the best way to put it on display was to make it his throne. Ironically, Ethiopia’s crime rate did fall!

Amid all of his successes, Menelik II had at least one real problem. Although he claimed to be a Christian, he misunderstood some of the Bible’s meanings. Some truths that the Bible expresses poetically, he believed were meant to be taken literally. Let me explain.

Jeremiah the prophet told the Lord “Your words were found, and I ate them, and Your words became for me a joy and the delight of my heart…” (Jeremiah 15:16).

Based on that text, when Menelik II got sick, he would literally eat a page from the Bible. I guess that was his health food plan, but it was seriously flawed. After Menelik II suffered a serious stroke, he decided to eat the books First and Second Kings. He proceeded to eat both books, page by page. That action caused digestive problems that contributed to his death.

I doubt that any of you would expect God to bless you just because you chewed up and swallowed some pages out of the Bible, but a lot of people do seem to treat the Bible with superstition. They act as if it’s a good luck charm. They like to keep a copy of the Bible around, thinking it may ward off bad luck. Sadly, many people who own a Bible rarely ever read it. If they do read or hear a little of it, they don’t even expect to understand it.

God did not intend for the Bible to be used as a relic. God gave us the Bible so we could understand its meaning. We find an example of this in Jewish history.

After returning to Israel from the Babylonian captivity, the people asked Ezra the priest to read the Bible to them. Thankfully, they came expecting to understand what it said. The Bible says everyone came “…who could listen with understanding…” (Nehemiah 8:2).  Ezra proceeded to “read from the book, from the law of God, to give the sense [i.e., explaining] so that they understood the reading” (Nehemiah 8:8).  When the day was over, they celebrated, “… a great festival, because they understood the words which had been made known to them” (Nehemiah 8:12).

Do you read the Bible regularly? Do you understand what you read? It is well worth the effort. The benefits are incredible. For example, look at what we can learn from just one Chapter in God’s Word. Psalm 119, points out that the Bible:

Do you want to learn more about the Bible? The Bible is read and explained every time we get together here at Bethel Chapel Church. We also give away free Bible study guides to anyone who asks for one. Whatever you do, make sure to ask God for His help to understand what it says. Here is an important hint. Before you begin reading, pray Psalm 119:18: “Open my eyes, that I may behold wonderful things from Your law.”