How to Keep Your Treasure in a Bad Economy

How to Keep Your Treasure in a Bad Economy 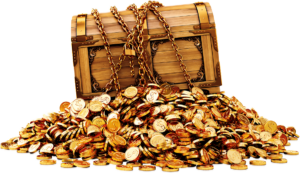 Should the government give away more stimulus money or not? That is being debated as I sit down to write today. Many around us are worried about how to meet expenses. The cost of everything is going up and is predicted to continue rising. That possibility has a lot of people running scared.

When the Great Depression hit in 1929, businessmen were jumping out of the windows of their office buildings. Because their money was gone, they felt like life was no longer worth living.

Does the possibility of a bad economy depress you? Let me challenge you with this thought: If a bad economy depresses you, then you have your treasure in the wrong place. I’m not talking about moving your money from stocks into bonds or into some other investment. I’m talking about treasuring something that is permanent and valuable instead of something that is only temporary.

Years ago, the newspaper columnist, Ann Landers, received a humorous (and true) letter that reminds us of how temporary treasures can be confused with permanent ones.

The letter from the woman married to the tightwad—she couldn’t get an extra quarter out of him—reminded me of my wonderful aunt who was beautifully warmhearted and had a great sense of humor.

Aunt ‘Emma’ was married to a tightwad who was also a little strange. He made a good salary, but they lived frugally because he insisted on putting 20 percent of his paycheck under the mattress. (The man didn’t trust banks.) The money, he said, was going to come in handy in their old age.

When ‘Uncle Ollie’ was 60, he was stricken with cancer. Toward the end, he made Aunt Em promise, in the presence of his brothers, that she would put the money he had stashed away in his coffin so he could buy his way into heaven if he had to.
They all knew he was a little odd, but this was clearly a crazy request. Aunt Em did promise, however, and assured Uncle Ollie’s brothers that she was a woman of her word and would do as he asked.

The following morning, she took the money (about $26,000) to the bank and deposited it. She then wrote a check and put the check in the casket four days later.

The truth is that all material things are temporary. As they say, there are no U-Haul trailers hooked up to hearses. Money is necessary in our world, but it doesn’t give us any lasting contentment.

For a Christian, large bank accounts or government handouts are not needed in order to be content. Christians don’t need to worry about their need for material things because Jesus told us very plainly that, if we put Him first in our lives, He will provide everything we need: “But seek first [God’s] kingdom and His righteousness, and all these things will be added to you (Matthew 6:33).

Jesus also tells us that what we love reveals what kind of treasure we have. “Do not store up for yourselves treasures on earth, where moth and rust destroy, and where thieves break in and steal. But store up for yourselves treasures in heaven, where neither moth nor rust destroys, and where thieves do not break in or steal; for where your treasure is, there your heart will be also” (Matthew 6:19-21).

As the first-century church leader Augustine put it:

Where your pleasure is, there is your treasure;

Where your treasure is, there is your heart.

Where your heart is, there is your happiness.

Are you wondering what this treasure is that could give such contentment? Martin Luther, the 16th-century reformer, explained it this way: “[Jesus] fulfilled the law for us. He averted the judgment of God from us and appeased God’s wrath. Grace, therefore, costs us nothing, but it cost Another much to get it for us. Grace was purchased with an incalculable, infinite treasure, the Son of God Himself.”

Jesus is the greatest treasure of all! How sad to live an entire life seeking the things of this world and then miss out on the greatest treasure in the entire universe. That is why Jesus warns us, “For what is a man profited if he gains the whole world, and loses or forfeits himself?” (Luke 9:25).

I am so glad to have a treasure that greedy criminals and crooked politicians can’t take away from me. Christ is more precious and more permanent than anything else this world can offer.

Remember that we are all going to live somewhere forever. Are you certain you know where that will be? God’s Word has solid, permanent answers about your eternal future–and you need to make sure you know what they are.

Is Jesus your greatest treasure? If getting to know Jesus better brings you happiness, then He is your treasure. He should be. Jesus is the only One who can forgive your sins and who can love you perfectly. Make sure you treasure Jesus Christ as your very own Lord and Savior.

Here is a link to a helpful three-minute video by John Piper that explains more about these things. https://is.gd/4PFFVB