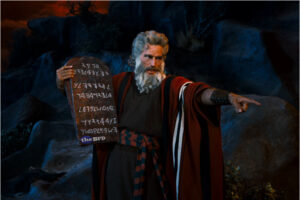 A young boy was asked by his pastor if he knew the Ten Commandments. “No,” he replied. “My dad said that I don’t have to know them because they are doing away with them anyway.” It does look like some politicians are trying to do just that.

It was only a few years ago that the courts demanded the removal of a 5,200-pound granite monument of the Ten Commandments in the rotunda of the Alabama State Judicial Building located in Montgomery, Alabama.

The attorneys who sued to have the monument removed claimed that their case was essentially about whether God is in charge or whether man is in charge. In their complaint, they stated that the monument of the Ten Commandments communicates the belief that “the law of God is the foundation of–and superior to–the law and institutions of the citizenry, [i.e., majority rule] and that God is necessary to the administration of justice.”

Those who petitioned to have the monument of the Ten Commandments removed clearly understood their importance. They just blatantly rejected its authority. The Bible tells us that mankind’s sinfulness is bent toward rejecting God’s standards. “The kings of the earth take their stand and the rulers take counsel together against the Lord and against His Anointed, saying, ‘Let us tear their fetters [or handcuffs] apart and cast away their cords from us!’” (Psalm 2:2–3).

In contrast, instead of rejecting God’s authority, the founders of the American government embraced it. The introduction to the Declaration of Independence says, “We hold these truths to be self-evident, that all men are created equal, that they are endowed by their Creator with certain unalienable Rights, that among these are Life, Liberty and the pursuit of Happiness.”

America was founded on God’s view of morality. As you walk up the steps to the U.S. Supreme Court building in Washington D.C., you can see a row of the world’s lawgivers near the top of the building. Each one is facing the one in the middle. The lawgiver in the middle, who is facing forward, is Moses and he is holding the Ten Commandments!  [You can see a picture of it here: https://is.gd/bgpXAf]

The introduction to the Ten Commandments also begins with God’s authority. “Then God spoke all these words, saying, ‘I am the Lord your God, who brought you out of the land of Egypt, out of the house of slavery (Exodus 20:1–2).

There is a big problem when a culture rejects what the Bible says is right and wrong. What do we replace it with? How do we decide what is right and what is wrong? How you define right and wrong depends on what authority you believe in. For example, I have heard people say that actions are only wrong if they hurt other people. If a majority of people think that something is right, does that make it right? If your neighbors got together and decided they didn’t want people like you in their community, is it OK for them to make you move out? Of course, that would be wrong, but what makes it wrong? Maybe your neighbors claimed that they felt hurt because you lived nearby. Whose “hurt” is most important?

If there is no Creator, then there is no ultimate right and wrong. My guess is that’s what attracts many to reject God. They want to be their own boss. They think that liberty means doing whatever they want.

The real liberty that God offers is the privilege of doing what we were made to do. “Everyone who is called by My name, and whom I have created for My glory, whom I have formed, even whom I have made” (Isaiah 43:7). We were created to live in loving obedience to our Creator, just as a goldfish is made to live in the water. Jumping out of the water does not bring real freedom to the goldfish.

Thankfully, America’s founding fathers believed that God made the rules for society. For example, we consider shoplifting a crime because God said, “You shall not steal.” Even though a person may feel like he has some good reasons for stealing, our law says that it is still wrong. The question is not left open to a vote.

In addition to giving good guidelines for government, God’s moral law has another very important function. On a personal level, it brings us face to face with our failure to follow it. “… death spread to all men, because all sinned” (Romans 5:12).

We all fail to live up to the perfect standard of holiness that God demands (see I Peter 1:15-16). What do we do? God’s Law is perfect, but we are not. “…the Law has become our tutor to lead us to Christ, so that we may be justified by faith” (Galatians 3:23).

Have you admitted that you are guilty of breaking God’s Law? If so, then allow that failure to drive you to Christ (see Galatians 3:24). He kept the Law perfectly and paid the full price for all of your failures.

Only faith in Christ is what will make us “… stand in the presence of His glory blameless with great joy (Jude 24).