Why Do God’s Standards Fail?

Why Do God’s Standards Fail? 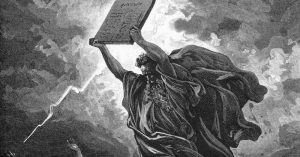 God has made very clear what is right and what is wrong. Over 3,000 years ago He even summarized His rules in ten brief statements found in Exodus 20:1-17. They are called the Ten Commandments.

It makes sense that the Creator has the right to make the rules. He, who made everything out of nothing, is also the One who will decide our eternal fate. We ignore Him at our own peril.

As important as God’s standards are though, most would agree that their impact on mankind as a whole has been, shall we say, really under-whelming. Every day the news is littered with stories about murder, stealing, lying, and greed, with so many other things that violate His Commandments.

To say the least, mankind doesn’t appear to be getting any better, either. The current ongoing rioting, looting, and disregard for human life highlight a widespread rejection of God’s pronouncements. We have all seen many recent examples of that being played out right before us on our TV screens.

By the way, just because we may not like God’s rules doesn’t mean they do not apply to us. A person may strongly object to the law of gravity, but that doesn’t make it go away. If you jump off a tall building, you’ll still die, whether you believe in gravity or not. God’s laws are here to stay no matter what we think about them.

I assume you agree that the Ten Commandments have largely failed to transform people’s hearts or their actions. Lately, our culture has been looking like a hopeless dumpster fire. That brings up an interesting question. Since there is very little evidence that the Ten Commandments have had much of a positive effect on our society, what good are they?

Stick with me. The answer may surprise you.

God’s moral Law not only points out our problems, but at the same time, it also points to a beautiful solution. I’ll start with the problem because the solution doesn’t make sense until we first understand the problem.

The problem is our failure as a human race. God’s written Law plainly points that out to us.

God’s moral ideals make it clear that every one of us has failed to live up to God’s standards. “All have sinned and fall short of the glory of God” (Romans 3:23).

To make matters worse, we are prone to change the purpose of God’s law into a checklist that we can keep, hoping our best efforts will make us good enough to spend eternity with God. That tactic is hopeless because “… a man is not justified by the works of the Law… by the works of the Law, no flesh will be justified” (Galatians 2:16).

Does that mean that God’s moral law is worthless? Not at all. “…through the Law comes the knowledge of sin” (Romans 3:20). We “… would not have come to know sin except through the Law; for [we] would not have known about coveting if the Law had not said, ‘You shall not covet’” (Romans 7:7).

God gave us His Law to show us how much we need Him. We can’t do it ourselves. We need Jesus. We need what He has already done for us. “The Law has become our tutor to lead us to Christ, so that we may be justified by faith” (Galatians 3:24).

Because God’s law points out what helpless failures we are, it puts us in a perfect position to discover the amazing solution that God has waiting for us. “For what the Law could not do, weak as it was through the flesh, God did: sending His own Son in the likeness of sinful flesh and as an offering for sin, He condemned sin in [His] flesh” (Romans 8:3).

Jesus became one of us. He lived the perfect life we could never live. He kept God’s law perfectly, but then He died a horrible death for us that He did not deserve. His death paid for our sins.

God’s Law declares that we all stand guilty before Him, but we don’t have to suffer the consequences of our failure to live up to God’s standards. “[God] made [Jesus] who knew no sin to be sin on our behalf, so that we might become the righteousness of God in Him” (2 Corinthians 5:21).

Every law of God cries out, “You need Jesus.”

Here is a verse of a song we love to sing here at Bethel Chapel Church:

The terrors of law and of God,

With me can have nothing to do;

My Savior’s obedience and blood

Hide all my transgressions from view.

God has an amazing plan to rescue us from our sin. Our efforts are useless, but Christ’s work is perfect. “For by grace you have been saved through faith; and that not of yourselves, it is the gift of God; not as a result of works, so that no one may boast” (Ephesians 2:8–9).

When we turn from our sin, when we accept God’s free gift, He makes us “… a new creature; the old things [are] passed away; behold, new things have come” (2 Corinthians 5:17). He begins writing His law on our hearts. His grace overflows into our lives, and we become His ambassadors. See Romans 8:3-4.

God’s standards only fail when we ignore them, or when we try to make them happen through our own efforts. When we turn to Him, when we trust completely in Him, He makes us into living examples of those standards. We aren’t perfect. We are works in progress, but as God’s children, we become part of the solution to the sinful world around us, instead of part of the problem.