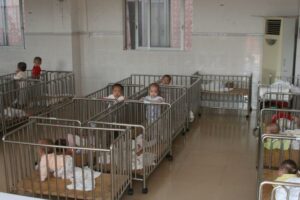 Several years ago, the Philadelphia Inquirer had a fascinating front-page article. It was about a Russian boy named Vanya who was born with cerebral palsy in 1990. For the first 9 years of his life, he endured horrifying treatments. The Communist government in Russia has routinely warehoused disabled children, and he was no exception. His clothes were mere rags, and he was confined to a metal crib for most of his first six years in this world. He was then transferred to a mental asylum–which he later described as a “devils’ den.” No one even took the time to teach Vanya how to talk. He had to learn how to do that on his own. He learned to talk by listening in intently on the conversations of staff members that came by his bed.

Through a long series of interesting developments, Vanya’s life was drastically changed in 1999. An American woman from the Philadelphia area adopted Vanya after long and often discouraging battles with the government officials in Russia. The Russian government had labeled him as “uneducable,” but his new American mother found out otherwise. He knew very little English when he came to America, but he became fluent in only four months. When he was 19 years old, he was an honor student at Freedom High School in Bensalem. One of his classmates said, “He’s very polite, a really great kid.” The Inquirer went on to say that Vanya was, “A history buff with an ambition to become a filmmaker… a dedicated Boy Scout and member of its national honor society, the Order of the Arrow.”

I believe this story illustrates a fundamental difference between an atheistic government and a country with roots in Christian principles. Because the Russian government rejects God, they do not place a high value on life. This is typical of societies that reject the Bible as a source of truth. Hitler’s Germany is another example. They slaughtered millions of people simply because they were not considered helpful to their society. The ancient Roman governor Nero arrested Christians, dipped them in pitch, tied them to poles, and set them on fire to light up his nighttime garden parties. The list could go on and on.

Cultures based on Christian ideals, on the other hand, are known for producing hospitals, orphanages, food cupboards, and rescue missions. When was the last time, for example, that you saw an “Atheist General Hospital?” Why is that? There are many reasons we could point to but let me highlight just one.

Atheist societies teach that humans are only higher forms of animals. Christian and Jewish cultures teach that we were created by God. It should not surprise us when people act more like animals when they believe they evolved from them. It is no accident that Communism and Nazism both embraced Darwin’s theory of Evolution. Charles Darwin himself wrote that “the civilized races of man will almost certainly exterminate and replace the savage races.”

The Bible teaches that God gave all of us eternal, living souls. That makes human life immensely valuable. Our Declaration of Independence boldly declared, “We hold these truths to be self-evident, that all men are created equal, that they are endowed by their Creator with certain unalienable Rights, that among these is Life…” The result of that grand ideal is a country that highly values human life. The Marines boast that they never leave a man behind. Our country spends millions of dollars every year to help suffering people in foreign countries. Tens of thousands of American soldiers have left the comforts of home to free millions of suffering people around the world. That is all based on the belief that life is a precious gift from God and that we are all ultimately answerable to Him. Atheist governments, on the other hand, believe that human lives are expendable and that all are ultimately answerable to the state.

I am so glad I live in a country where a discarded, handicapped boy like Vanya can find a home where he is loved and accepted. I am also glad that the Creator of all things proved His willingness to love and accept us by leaving heaven to rescue us from being discarded eternally. “For [God] rescued us from the domain of darkness, and transferred us to the kingdom of His beloved Son, in whom we have redemption, the forgiveness of sins. He [i.e., Jesus] is the image of the invisible God…. For by Him all things were created…. He is before all things, and in Him all things hold together” (Colossians 1:13–17).

When we trust Christ to forgive all of our sins, we can rest assured that we are forever safe in His arms. Jesus said, “Come to Me, all who are weary and heavy-laden, and I will give you rest. Take My yoke upon you and learn from Me, for I am gentle and humble in heart, and you will find rest for your SOULS” (Matthew 11:28–29).