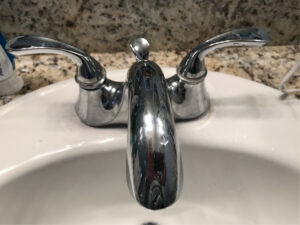 James Montgomery Boice (who used to be the pastor of the Tenth Presbyterian Church here in Center City, Philadelphia) told about the time that Lawrence of Arabia visited Paris with some friends from Saudi Arabia after World War I. Lawrence of Arabia enjoyed showing his friends the wonderful sites around Paris. What fascinated them the most, though, was the faucet in their hotel room. They spent hours turning it on and off; they thought it was wonderful. All they had to do was turn the handle, and they could get all the water they wanted.

When it came time to leave, Lawrence found them in the bathroom trying to detach the faucet. They explained, “It is very dry in Arabia. What we need are faucets. If we have them, we will have all the water we want.” Lawrence had to explain that the faucets were only useful because they were connected to a pipeline that was filled with water.

Some people look at religion in much the same way those Arabian visitors looked at their hotel faucet. Since they think religion alone brings God’s blessings, they practice their religious acts faithfully. The truth is that God’s forgiveness of our sins and His promise of a peace-filled life only come when we have a connection to Him. That connection is just as vital as the pipeline was to the faucets.

John Wesley, who lived during the time of the American Revolution, had to learn this lesson the hard way. He was a deeply religious person. He went to church faithfully, and not only heard a lot of preaching, but also delivered many sermons himself. He was a church member, a minister, and the son of a minister. He belonged to a “religious club” at Oxford. The purpose of that club was to show how to perfect the Christian life. Wesley served as a foreign missionary too, but even as he preached to others, he had no assurance of God’s forgiveness for himself.

On May 24, 1738, Wesley reluctantly attended a small meeting in London where someone was reading aloud from Martin Luther’s commentary on the book of Romans in the Bible. “About a quarter before nine,” Wesley later wrote in his journal, “while he was describing the change which God works in the heart through faith in Christ, I felt my heart strangely warmed. I felt I did trust in Christ, Christ alone for salvation; and an assurance was given me that He had taken away my sins, even mine, and saved me from the law of sin and death.” That was the beginning of the great Wesleyan revival that not only brought many people to a personal relationship with Christ, but also did a lot to improve the landscape of British culture.

What made the difference? John Wesley saw the difference between outward religion and the inward reality of knowing Christ as the only One who supplies real forgiveness. Jesus explained the difference this way, “I am the good shepherd, and I know My own and My own know Me” (John 10:14). We learn how to have a personal relationship with Christ from the words that He left for us to study: “So faith comes from hearing, and hearing by the word of Christ” (Romans 10:17).

Are you connected by faith to Jesus Christ? The Apostle Paul, who was a great sinner, discovered that “The grace of our Lord was more than abundant, with the faith and love which are found in Christ Jesus” (1 Timothy 1:14). Turn from your sin and trust God’s abundant grace, and you will be forever connected to forgiveness that will never run dry.

If you would like a booklet that explains how you can know Christ for yourself, contact me and I would be glad to send you one for free.