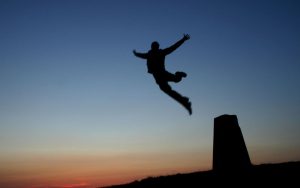 I recently met a very nice Jewish gentleman who had just been diagnosed with cancer. At one point in the conversation, he began asking me about spiritual things. After I described to him the importance of trusting what Christ did on the Cross to pay for his sin, he asked me, “Oh, do you mean I need to have blind faith?”

It is common to hear a person say that faith, any kind of faith, is all that’s important. “Just have faith” is often the advice people hear when they are really worried about something. I don’t think that advice is very helpful. Here is a story to illustrate the uselessness of faith in something worthless.

In the mid-1990s a story circulated about a hospital in a Midwestern town. The building was relatively new, only 35 years old. (I must be getting old because that sounds like a short time to me.) After all that time, someone discovered that the water for the fire sprinklers had never been hooked up. There was a main pipe going out of the building, but it only extended 4 feet underground and wasn’t attached to anything!

The fire hoses tucked away in the walls and the ceiling sprinklers all looked great. They were installed properly; the only problem was that there was no water supply. For 35 years everyone trusted that they would be safe if there were ever a fire. With no water, though, their faith would have done them no good at all. In other words, they put their faith in something that wouldn’t really help them.

Do you get the point? Being sincere isn’t enough. Faith is worthless if it isn’t put in something that can really make a difference. Having faith in faith may make you feel better, but you can’t count on it to help you through difficult days or to keep you safe when you stand in the blazing presence of a completely holy God.

Let me assure you that Jesus is real. Not only is there a lot of historical evidence to confirm His claims and His resurrection, but when a person puts his or her faith in Jesus, it causes a radical change of life that can’t be denied. I know this is true because I have experienced it, and I have also seen it happen in countless other lives as well.

The Apostle Paul is an example from the Bible. Before he put his faith in Jesus, he hated the followers of Christ. In fact, he was hunting them down and putting them in prison. Then he met the risen Christ and everything changed. He surrendered his life to Jesus Christ and fell in love with Him. He even endured much suffering because of it, but his love for Jesus never wavered. This same kind of radical change will happen to anyone who turns away from sin and gives his or her life to Christ. “Therefore if anyone is in Christ, he is a new creature; the old things passed away; behold, new things have come” (2 Corinthians 5:17).

When you open your heart to Christ, not only are all your sins paid for and forgiven, but you will also experience a sense of peace and joy you have never felt before. Jesus promised “… in Me you may have peace. In the world you have tribulation, but take courage; I have overcome the world” (John 16:33).

The pandemic may not be over, but you can have the peace and joy that comes from Christ. It is so real that you can lean on it with all your heart. Put your trust in the only One who suffered, even to the point of death, and who came back to life so that we can have supernatural peace.