Every Christian is a Living Sermon

Every Christian is a Living Sermon 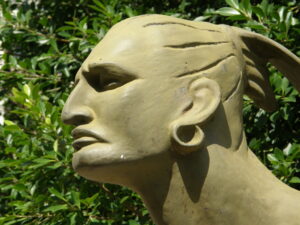 As the first prominent freedom fighter of the Americas, Chief Hatuey fought heroically against the Spanish invaders of Cuba. (He died in 1512.) That invasion was led by Hernando Cortez, and he later conquered the Aztec Empire in what is now Mexico. A statue still stands in Cuba that celebrates Hatuey as a national hero.

Hatuey and his followers bravely resisted the Spaniards, but eventually, Hatuey was captured and sentenced to be burned alive. After he was tied to a stake, a priest told him that if he converted to Christianity, he could go to heaven. Hatuey asked if the Spaniards were going to heaven. When the priest replied that they were, Hatuey answered that he did not want to go to heaven then, but to hell–because he didn’t want to be in a place where there were such cruel people.

It’s a horrible story, isn’t it? A freedom fighter rejected religion because of how he was treated by others who claimed to be following Christ.

Sadly, there are some modern-day parallels to this tragedy.

Steven Cole, a pastor, lays out this warning. “The American public… think[s] that all Christians are hypocrites, and this gives them an excuse to reject Jesus Christ. After reading news stories about religious offenders, many unbelievers justify themselves by thinking, ‘I may have my faults, but at least I’m not a child molester. At least I’m not bilking the poor out of their money so that I can live in luxury. At least I don’t pretend to be religious like those hypocrites do!’ And so the enemy damages the reputation of the gospel. … We who know Christ are called the body and the bride of Christ. As His body, we are to beautify our lives with godliness, so as to attract others to our Savior.” [https://is.gd/gLBln6]

These issues bring up a question that all Christians need to think seriously about. If you claim to be a Christian, what do your neighbors, your friends, and your family think of Jesus because of what they see in your life?

God doesn’t just forgive our sin so that we can go to heaven when we die. The followers of Jesus Christ are to be “a chosen race, a royal priesthood, a holy nation, a people for God’s own possession, so that [we] may proclaim the excellencies of Him who has called you out of darkness into His marvelous light” (1 Peter 2:9).

God saves people so that they can point others to “the praise of the glory of His grace, which He freely bestowed on us in the Beloved [i.e., Jesus]” (Ephesians 1:6).

When a person turns from sin and puts their trust in Jesus, God puts them on a pathway to “… love, joy, peace, patience, kindness, goodness, faithfulness, gentleness, self-control….” (Galatians 5:22–23).

I’m sure you are not cruel like those Spaniards, but do others see in you a life that would attract them to Jesus Christ? Has God made a dramatic change in your life so that others want the peace and joy that you have?

I am my neighbor’s Bible

He reads me when we meet.

Today he reads me in my home –

Tomorrow on the street.

He may be relative or friend

Or slight acquaintance be.

He may not even know my name,

Yet he is reading me.

“Do all things without grumbling or disputing; so that you will prove yourselves to be blameless and innocent, children of God above reproach in the midst of a crooked and perverse generation, among whom you appear as lights in the world” (Philippians 2:14–15).